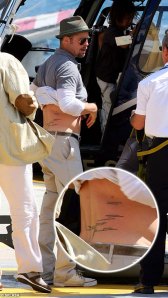 There are very few things that annoy me in life, and right at the top of the small list are celebrities! I hate them. Not that I’m jealous of them or anything, its just that sometimes, they do things that makes me want to throw up in disgust. On screen, I like them; I like their acting and I like the men and women they portray, but off screen, they are just irritating, piss-off people with a bottomless wallet and a bigger ego.

Ok, I can accept it when Britney Spears walks down the road naked and the paparazzi drool on their cameras. I can also accept it (grudgingly) when Tom Cruise talks about Scientology and tries to convince us that we are aliens. But what I can’t really understand is when Brad Pitt tattoos a map of New Orleans on his lower back as a tribute to all the victims of hurricane Katrina! 😀

How is this a tribute to anyone except the poor woman with whom he sleeps every night? Or is he planning to do a Salman Khan and walk around bare chested for the rest of his life? But for god’s sake, a tattoo!!! Now, I’ve seen and heard everything! This is just disgustingly insane!

Celebrities are people who are supposed to smile for the cameras and pretend to act. But all they seem to do is smile and pretend to care. Aamir Khan pretended to care for the “violence affected brothers and sisters” and decided to carry the Olympic torch! I really want to meet his PR agent and shake his hand! 😀

I guess we live in a world where the quirkiest actions are greeted with the most response. I am old school, and I am still trying to grasp the pace at which the world is becoming dumb. 😀

15 thoughts on “When stars pretend to care!”