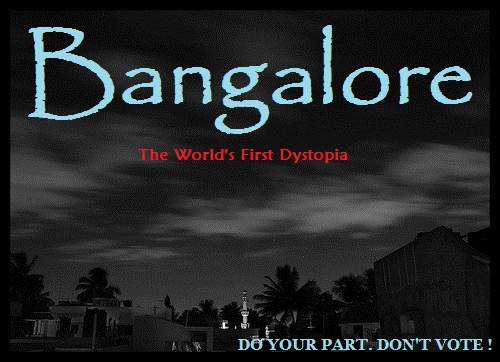 Ever wonder what it would be like to live in a Dystopian world without rules and regulations and people in power ruthlessly expanding themselves at the cost of the general population? Here’s what you don’t see on BBC World News and CNN International News:

The people of the state of Karnataka are currently standing around their TV sets scratching their heads and wondering how they became a part of a zombie movie. The local and national news channels didn’t have anything more interesting, entertaining or bloody than the crisis worsening in this state. And they didn’t have to, because one look at the mindless murk that we call politicians and their actions today in Parliament and we know that our chances of survival are much better in Raccoon City, without Alice. (Ref: Resident Evil)

Twenty to thirty MLAs bursting into a secure Parliament house, assaulting the cops, ripping their clothes off and trying to get past a barricade behind which hapless, unarmed cops are trying their lousy best to get out of the way of clawing arms, well-aimed spit and breaking glass – this was the scene that we woke up to this morning. And to think that we elected these clowns into office makes me wonder about the shortcomings of the democratic process.

India has quite a lot of issues to address at this point of time without the added ridiculousness of farmer-turned-politicians (who flunked 8th grade) acting like they deserve an award just for their existence. We have a crisis going on at the Commonwealth Games being held in the nation’s capital, where the very image of the country is being put to the acid test. Surely enough, behind all the muck over there, criminal politicians played the fiddle and made money for themselves. Geographically, the country is in a violent fight against itself to hold on to Jammu & Kashmir, where bloodshed has, unfortunately, become a part of a normal lifestyle. Power crises in almost 90% of the country’s length and breadth coupled with water and food shortages paint a very bleak picture for ‘India Shining’.

The word ‘Corruption’ is thrown around a lot in the media these days – this guy’s corrupt, that woman’s corrupt, the whole bloody parliament is corrupt. But what we fail to realize is that this apparent corruption is just an extension of basic Indian nature. Not human nature – Indian nature. We are a race of people who would do anything for money and fame. I’m sure there will be do-gooders who come out and make advertisements and write articles about how we are not a nation of thieves and how we can behave better and how we can avoid bribes, but in the end, everyone does it. There’s no point in feeling offended at this observation, because if you do, then you and the high horse you rode in on can go to hell. This is the sad truth.

So, let’s stop trying to change who we are and start trying to live with that realization. Let’s do our part in trying to screw our country over. I don’t have to be a member of parliament to do it – isn’t that one of the great things about democracy? Power of the people? Let’s do it, then.

Don’t vote. Ever. It’ll be fun to watch ourselves burn.

If ever a politician reads this post, then do me a favor. No, do yourself a favor and kill yourself.